Some weekend miscellanies on my Airbook.

A coupe of weeks ago, I installed the binary distribution (1.8.2) of Pandoc. The binaries are installed in /usr/bin, while the older ones were in ~/.cabal/bin/. To test my installation, I used a fairly basic document with some $\LaTeX$ expressions, references, and code chunk with or without syntax highlighting (because the latest version of Pandoc added support for the R programming language). Here is the test document.

For unknown reason, the citation mechanism via citeproc-hs (0.3.3) was broken because of an hard-coded path, as described in this issue. So, I decided to reinstall Pandoc with cabal as I did before. (This time I had no problem with cabal, though.) So basically,

And voilà! I should note that a lot of warnings were issued when building the packages, like

This has been referenced on Ticket #5128, and it led me to suspect that I rather need to update my entire Haskell system. Well, that was quick and easy with the Frameworkized version available on http://hackage.haskell.org/platform//mac.html.

Next to that, even if I didn’t get any problem compiling a sample demo program, it throws out some warnings (see partial output below):

As discussed on Ticket #5019, I upgraded to the latest GMP (but not MPFR), and this warning disappeared.

Here is a preview of the HTML version of the test document, with working references, syntax highlight and $\LaTeX$ support. (The commands I used were: pandoc pandoc_text.md -s -m --bibliography="ml_dysp.bib" -o 1.html.) 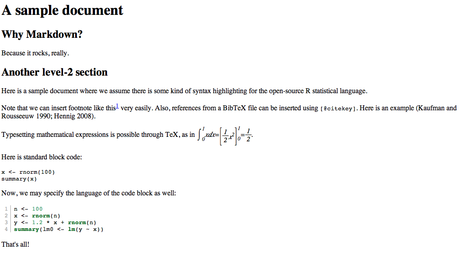 Ah, remember to never install so-called “superpack”, you know the pkg that is supposed to do everything for you (like the scipy-superpack) . Note that I don’t want to denigrate all the efforts made by the maintainers (and for what is worth, maintaining working package on a Mac is a challenging task!), but the problem I have with that approach is that you never know what is installed or whether it will break what you already installed by hand. In my case, I decided to give a try to SimpleCV. I dont’t know why but instead of a simple easy_install simplecv, I choose the packaged binary. As can be seen, a lot of stuff is installed directly in /usr/local`. 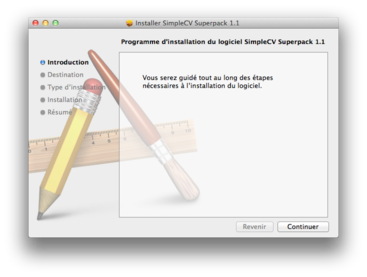 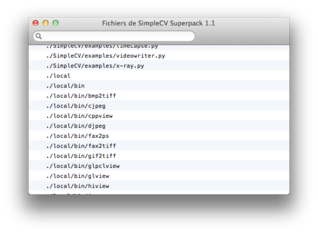 There were so many problems with that install (notwithstanding the fact that it targeted Python 2.6, while Python 2.7 is now the default under OS X Lion) that I decided to reinstall everything, that means:

At present, most of the demos scripts are working, including face tracking with Airbook built-in camera. I will probably have to tweak the install a little bit in the future. But that’s another story…