This post deals with Emacs and (Neo)vim, but the title is just a joke, of course: I use both editors, although most of my programming work is done in Emacs. I spent the past couple of weeks using Emacs, Safari and iTerm2 (mostly for ssh stuff) only. I started using Vim to get more familiar with modal editing (despite what I still think of it) and relevant mappings. As Doom defaults are mostly Evil-centric, I thought this would be a good opportunity to learn more about visual and normal modes. Vim offers a far better experience in a Terminal, compared to Emacs running in non-Gui mode, and it is still faster over ssh, IMO.

When I’m editing text in Emacs, I now came to appreciate a few idioms like % to move from one delimiter (parenthesis or square bracket) to the other, * and # to search forward and backward, g; (goto-last-change) to go back to where we were before moving, gg to go to top of file, or ) and ] to move forward quickly (as opposed to w and b for words), notwithstanding some specific Doom settings like gr (eval-region) or gd and gD (+lookup/definition and +lookup/references, which make use of LSP backend capabilities when available). I also learned to use a few combination of verb+motion, like ciw or diw, 5j, etc. I’m still too much familiar with shift-select and the use of arrow keys to use proper visual motion in some cases, but that’s okay. Likewise, C-a and C-e are still too much entranched in my muscle memory to think of Vimesque alternative like 0 and $, especially since I use them in my Terminal and other macOS app.

That’s the advantage of Doom Emacs after all: we can use both keymappings at any time. If you wonder, I also use standard macOS keybindings like ⌘-R (search and replace) and ⌘-F (forward search only, using rg or swiper). I think this is what I use most of the time, so that’s not a big deal for my poor memory. I know we can do a lot more, in either editors, but I usually don’t need those extra superpowers. For instance, while replacing the word under cursor with a yanked one can be done nicely in Vim (the same applies for Emacs), I prefer to query and replace, especially if this has to be done multiple times. Maybe I’ll change my mind later or when I become more fluent with yanking in Vim. For me, the most useful commands for yanking and pasting in Vim remains yy, dd and p, of course, and I only started to appreciate selection in visual mode using V, S-V or C-V.

Now comes the question of the color scheme, since I always advocated the idea that simple and light themes are often better. Some nice themes are described on Jason Blevins’s site, and I tried a lot of colorless or minimalist themes in the past. I don’t really like pink or purple, so Atom or VS Code default colorful schemes, and Emacs variations thereof, are not an option. In the end the buffer just looks like a rainbow. I use the wonderful Nord (dark) theme in both Vim and Emacs, as well as iTerm. In my view, it looks better in Vim compared to the corresponding implementation for Emacs in non-GUI mode, but since I generally use Emacs in a GUI I don’t really care. I made some modification to the base color scheme, though. The idea was to have a lighter color scheme, after removing extraneous colorization for faces that are not that essential when writing prose or code. You can have a look below: 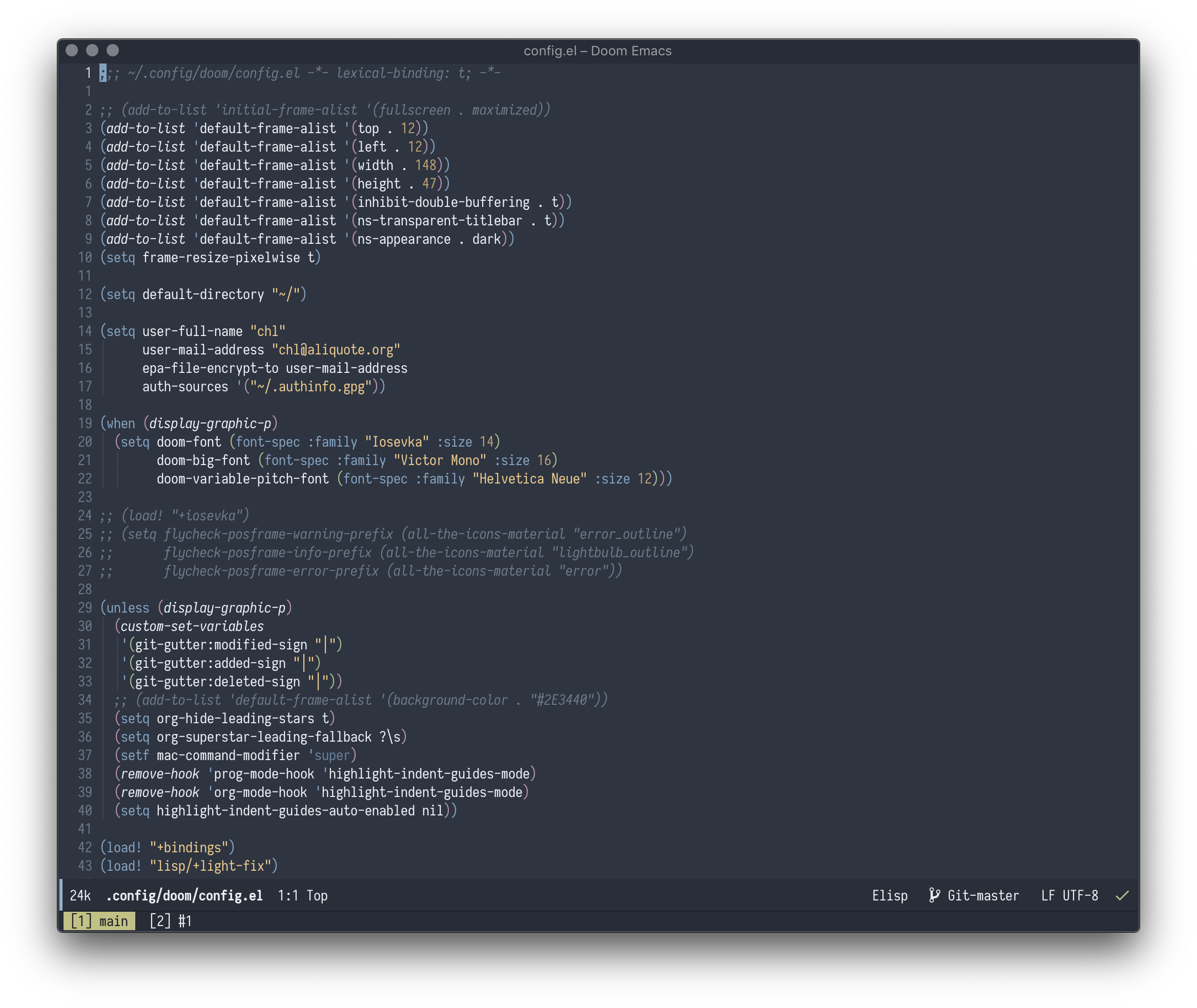 The idea is simply to remove syntax highlighting for everything except keywords and related language-specific forms, which use the same base color, and to highlight strings differently (with a dimmed variant for numbers):

The idea of using a slanted variant for functions is actually just a test. It works great for Lisp-like dialects and Python, though.

I made further customization for “text-mode” (Markdown and Org), which amounts to using essentially white headers (level 1 and 2), dimmer highlight for inline code and URLs, etc. After all, when you are writing prose, you don’t necessarily want to see color every 3 or 4 words. The fact that my TODO list or Org documents were just full of colors was driving me crazy at some point. Metadata and Org drawers are all using dimmed colors as well. Finally, selections and jumps are also highlighted using different background colors.

Well, that’s all. I go back experimenting with Vim motions and maybe my next posts will all be about Neovim.