Recently I decided to switch to the Fish shell, after several years of zsh’ing everythings in a terminal on my Mac, mostly iTerm by the way. Here are some thoughts after some days of use.

I have been an happy Zsh user for several years, and zsh has been my main shell on my last three laptops. I used the nice Oh-my-zsh framework to add plugins and themes, although I ended up building my own PS1 prompt since none of those provided by the existing themes was to my liking. My .zshrc config file evolved over time, but I never took the time required to update it to the latest updates of Zsh or Oh-my-zsh. All I did was to remove several plugins that I was barely using, notwithstanding the fact that sometimes there were some conflicts between aliases or functions defined in there and shell builtins or other config files (e.g., .gitconfig). 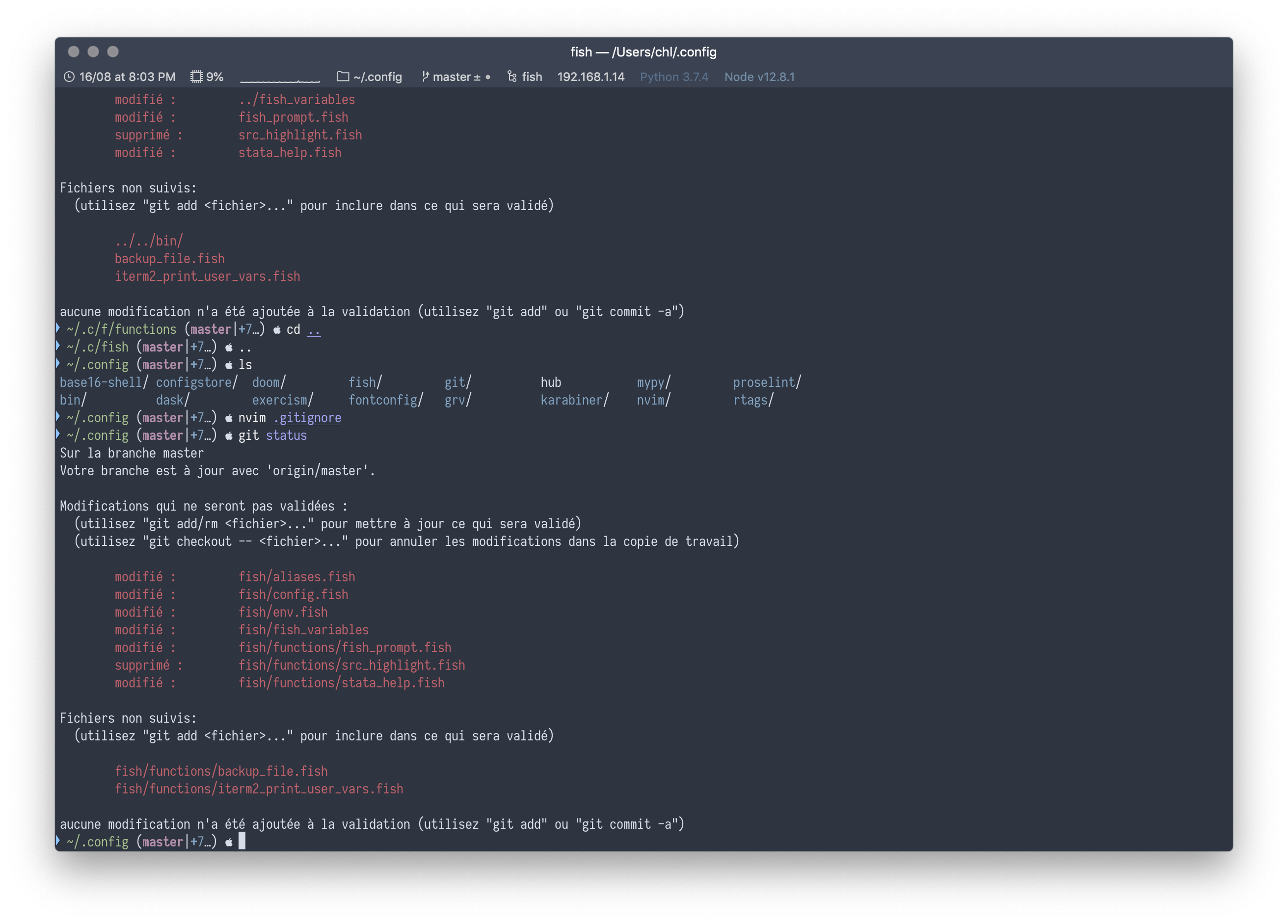 Yesterday, I decided to try Fish and I must say this was quite an happy move, especially when I found my way with setting the $PATH variable correctly. Beware not to put tilde to indicate your home directory, but use an aboslute path or a predefined $HOME.

Some of my Bash/Zsh functions needed some updates, e.g., to accomodate the fact that variable substitution ($(var) becomes (var)) and function arguments works differently in Fish. For instance, instead of $1 to capture the first argument that was passed to a function, you have to use $argv, and so on. That being said, you can attach sort of docstring to your function and they will be printed in the terminal when you ask for completion using TAB. Aliases are simply displayed as is in the completion menu. Here is an example with a custom function (stata_help) and alias (statadocs): 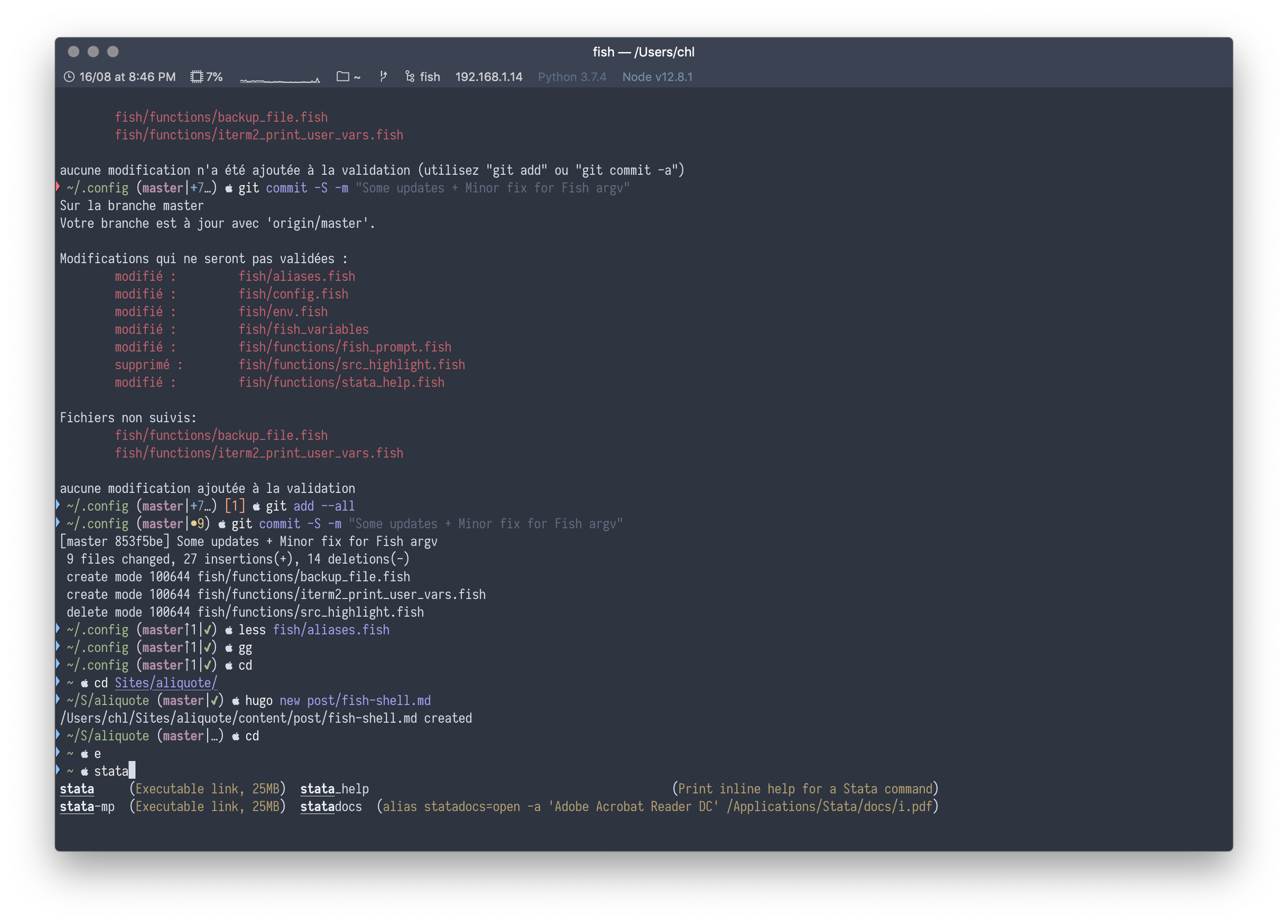 Other nice features of Fish: syntax highlighting and automatic indentation is enabled when writing inline functions at the prompt; command arguments are colorized which makes it easier to identify the name of the command from its arguments when looking at the terminal at a glance; Fish is aware of your man pages (just run fish_update_completion and let Fish index all of them); correct paths are highlighted (underlined) as you type, incorrect paths or commands are highlighted using a different color. Other features worth mentioning: the history is easier to use compared to the one you get with zsh (up/down arrow with a combination of ALT); default themes (prompt and color scheme) are quite good–actually I stopped on the “VCS informative” shell prompt and the “Just a Touch” color scheme, with Nord theme on iTerm (as the default theme for NVim and Emacs, and VS Code, because this is the only dark theme I seem to support for syntax highlighting of code). I know there’s a Nord theme in progress, but I am quite happy with the current color scheme actually. And of course, frameworks (Oh-my-fish) and package manager (Fisher) are available as well.

All those features make working in a terminal a really pleasant experience. The little status bar that you see in the above screenshots is from iTerm. Together with shell integration, it adds extra power to this wonderful terminal app, which already provided close to Tmux experience, but natively. I am trying to add some useful items in the status bar, e.g., displaying number of running and stopped jobs, whether we are on ssh or not, if a Python virtual env can be detected in the current working directory.

My Fish config files are available on Github if you are interested. For the time being, this is just basic stuff, with pieces stolen here and there on the web