What’s about the computation of the odds-ratio associated to the main effects when the interaction is significant? For instance, consider a logistic framework with two main effects, say $\beta_1$ and $\beta_2$ and a third coefficient $\beta_{12}$ that represents the interaction. For the purpose of the illustration, we can easily imagine two such factors, e.g., the smoking status (smoker or not) and the drinking status (occasional vs. regular drinker). The response variable might be any medical outcome of potential interest (cancer, malignant affection, etc.), coded as a binary (0/1) variable. If the interaction is significant, then talking about the odds-ratio (OR) associated to the smoking variable has no sense at all. Instead, one must describe two OR: the OR for subjects who are smoker but occasional drinker, $\exp(\beta_1)$ and the OR for subjects who are smoker and regular drinker, $\exp(\beta_1 + \beta_{12})$.

The two authors hold the necessary Stata code on their homepage. However, I would like to illustrate the issues raised by the interpretation of interaction terms when using non-linear models with R.

The effects package facilitates in some way the graphical display of effects sizes and we will use it in the short application proposed in the next few paragraphs.

Let’s consider the Arrests data, which is also used in (5) (See also this brief report, and (9), Chap. II.2, p. 57) and aims at studying the probability of release of individuals arrested in Toronto for simple possession of small quantities of marijuana. Characteristics of interest are: race, age, employment, citizenship, previous recording in police databases. 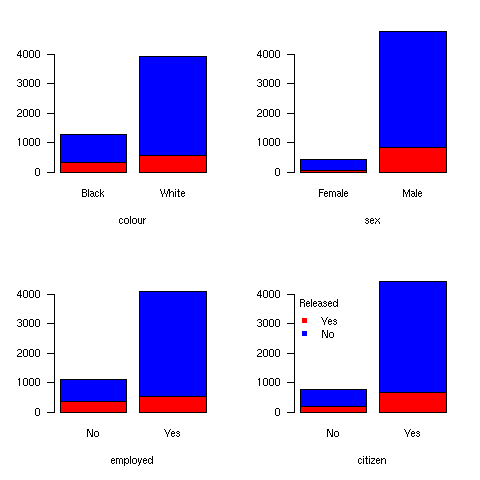 The above figure could hardly be interpreted as is because we need to consider both marginal (not shown) and conditional (these plots) distributions at the same time. However, we can run a reduced (compared to that used in (5)) model including color, age and sex, as well as color × age. This is done as follows:

and here is the resulting output:

At first glance, the model seems quite satisfactory and no deviations from standard assumptions are noticed (see next Figure, left). 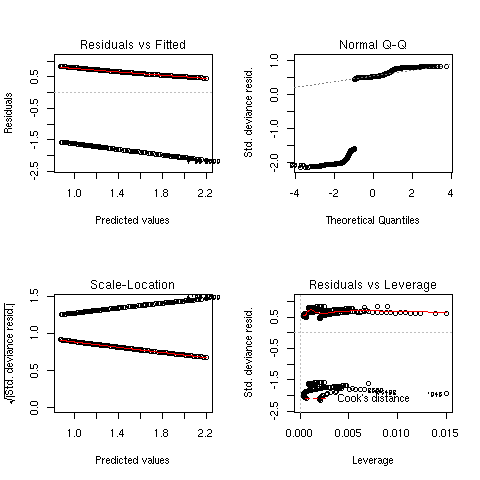 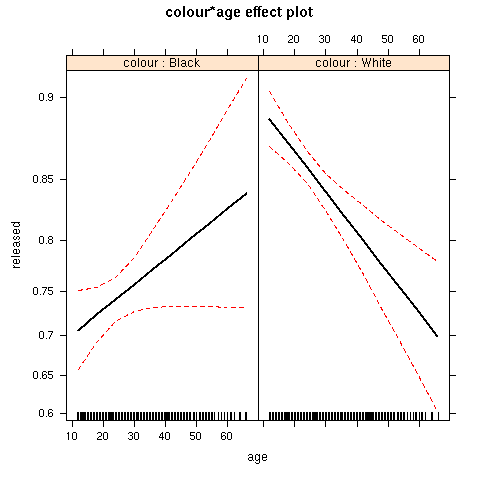 Now, we can get an ANOVA-like summary by issuing:(5)

The results are shown below (see also figure above, right):

Note that the vertical axis is labelled on the probability scale (i.e., the response scale) while the estimated effects are plotted on the scale of the linear predictor. The 95% (pointwise) confidence interval is wider at the extreme values of the age variable. Now, we can proceed to the estimation of the interaction effect using the method proposed by Ai and Norton.