I always enjoy reading The Setup from time to time. Here is mine.

I try whenever possible to stick to basic text-based workflow and I don’t like complex UIs or applications that eat up all my RAM. I am working on a Macbook Air that I bought in 2010, and I stopped upgrading my OS at Lion. I didn’t even bother updating to the latest 10.7.5. I only have 4 Go of RAM and most of the times that’s just enough. 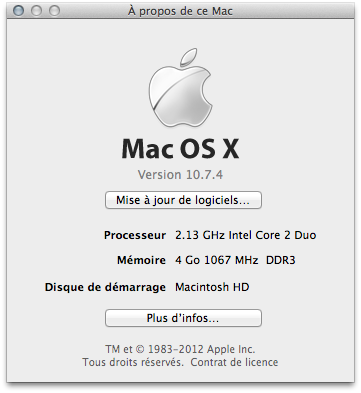 Since Apple fullscreen capabilities just suck with dual monitor, I rarely plug a second monitor onto my Airbook, and keep working with the Airbook screen (1440 x 900 pixels). I have no external mouse, and I use Moom for windows management. The fact that Apple raised screen resolution of all their 13″ laptops above 1024 x 768 was one of the main reasons I switched from a 15″ Macbook Pro to an Airbook, by the way. I also have an iPhone which I use to read and process incoming emails when I’m not in front of my computer, and more recently I got an iPad mini to read books I buy on O’Reilly shop. I don’t have other personal machines at home, and I backup my Home directory on a Time Machine and critical documents on AWS with Arq. I have a 100+ Go account on Dropbox, which I use for cloud storage and web sharing. I no longer use Apple’s services after they changed (again and again) their policies regarding cloud storage, email management, or simply applications packaging/management (read, the infamous AppStore). In sum, I try keeping the best of Apple’s UI — nice looking and comfortable laptop (although too expensive, really), Quartz device, memory management, drag’n’drop facilities, core BSD system — while avoiding pointless enhancements.

I use few paid applications, and these are mainly for statistical work or sharing stuff with colleagues that cannot imagine their life without Word or Excel (or worse, HTML emails). I do not blame them nor I am making any judgment, however, since I believe everyone should be able to choose the best way to work. Whether it is the safer and clever way is another issue; I’m not so much interested in that, I just know this never worked for me. Such applications include: Stata, Mplus, Apple iWork suite (mainly Pages), and Mathematica. For statistics, the rest is essentially free software: R, ggobi, Octave, Python (Orange, Pandas, StatsModels), Weka, JAGS. I have a plethora of other applications that I barely use once a month. I spent several hours testing new software or updating 32 and 64-bits dependencies in the past. I now stick to 64-bits program and everything goes under my /usr/local which is currently facing something like 13 Go of various stuff. Yes, it would need to be refreshed more often :-)

I recently stopped using Apple Mail to archive or even process my emails, and I’m now saving them on my HD with offlineimap. I can search and read them using mu at the command-line or directly from Emacs using mu4e.

I have been using Safari since my first Mac back in 2005, but I am now using Chrome. I just find it more simple and less greedy in terms of RAM. I used to have Gmail opened all time but I occasionally have two or three extra tabs opened at once: Feedly (now that Google Reader is dead), Cross Validated, and a Google page. And when I get bored or want to check how accessible a website is, I just use links for browsing. I bookmark a lot of webpages on my HD or saved links via http://bit.ly. I use Twitter as my main social network, in concert with Prismatic and Feedly, usually to share interesting news I found while reading or browsing. I do not have a Facebook account and I do not use Google+.

I spend most of my days typing commands in iTerm2, using zsh as my main shell interpreter with a very basic setup based on oh-my-zsh. I may run a shell directly from Emacs, though. I use sed (and more rarely awk) and Bash scripts for interactive processing of data or text files. I’m happy with the GNU coreutils and Scientific Library, although I don’t really like what Richard Stallman has to say at times. My text editor and personal psychotherapist is GNU Emacs, and I used it for almost everything. I tried other software (TextMate, TextMate 2, Sublime, vi) but none offered me the freedom and simplicity of Emacs UI. Depending on my mood, I may run Emacs in Cocoa or cli-mode. I try to keep my own workflow as clean and reusable as possible with Makefile and version control systems (usually, Git), although I often end up thinking that a good workflow would better be: Do as I say not as I do.

I take notes using plain ASCII text, or Markdown (with Marked.app as my main previewer). Most of my reports, articles, posters, or handouts are written using LaTeX or ConTeXt, but I often write directly in Markdown and I let Pandoc post-process them. I also like Sweave, noweb, knitr, and Pweave a lot.