This probably is the last and heaviest iteration of my Neovim setup cleansing days. Starting with a 36-40 ms startup time and 10-12 plugins, I ended up with a 26-30 ms startup time and a total of 9 plugins, with half of them not loaded most of the time. I could possible optimize this startup time by converting my color scheme to pure Lua, but I prefer to keep it as plain old VimL since I may reuse it with Vim instead of Neovim.

There are a lot of useful (and less useful) advices on the web, which mostly amounts to relying on pure Lua-based plugins or general settings (except for autocommand), disabling unused built-in stuff, eventually disabling Shada (I didn’t), etc. Unlike others, I don’t use much plugins, so I am not concerned with plugins that can be properly lazy loaded or not. I like to have a bunch of settings in my after/ftplugin directory, since I find it easier to manage language-specific options there. It’s all written in VimL but I may consider using ftplugin directly with Lua code at some point.

Here are the latest benchmarks using medium performance of my CPUs:

I uninstalled Telescope and got my way back to Fzf. Navigating my buffers or filesystem now works like a charm, unlike Telescope which I found less responsive and reliable (oftentimes the caret was not on the right spot). I also removed null-ls to get rid of plenary dependency. That’s a bit silly, because I really like this plugin and the author/maintainer does a really great job to keep up to date with Neovim upstream deprecations or changes. Yet I don’t want to rely on extra dependencies. I have to figure out how to replace null-ls linter/fixer facilities. At the moment, I delegated fixers to formatprg option, but I though I will maybe configure the efm language server to simplify the task and get linting facilities. Finally, I moved all other plugins as opt plugins, either using filetype-based filters (vimtex, nvim-lspconfig, nvim-parinfer) or key or command-base triggers (Comment, nvim-colorizer). As for treesitter, I simply added a event = 'BufRead' conditional, which allows to gain a little when firing up Neovim in a directory or without any file as I often do to define a proper working directory. Besides, I removed unused stuff in my autoload directory, as well as useless autocommands.

Here’s the list of plugins I’m currently using (in addition to packer), as of this writing: junegunn/fzf, junegunn/fzf.vim, lervag/vimtex, gpanders/nvim-parinfer, norcalli/nvim-colorizer.lua, numToStr/Comment.nvim, nvim-treesitter/nvim-treesitter, neovim/nvim-lspconfig. I could probably get ride of nvim-lspconfig since the built-in LSP can now be configured more easily starting with Neovim v0.8. See New LSP features in Neovim 0.8.

I also reorganized my Lua files using a cleaner structure:

It’s also been a week that I reconfigured my whole desktop using a light color theme and a mix of tiled and floating windows, thanks to the Tactile extension and Ubuntu built-in shortcuts to move or resize windows (Alt-F7 and Alt-F8). Since I don’t move terminal window a lot, this works for me and I don’t feel like I need to install Sway.

Here is a screenshot of the two workspaces I generally use all day: 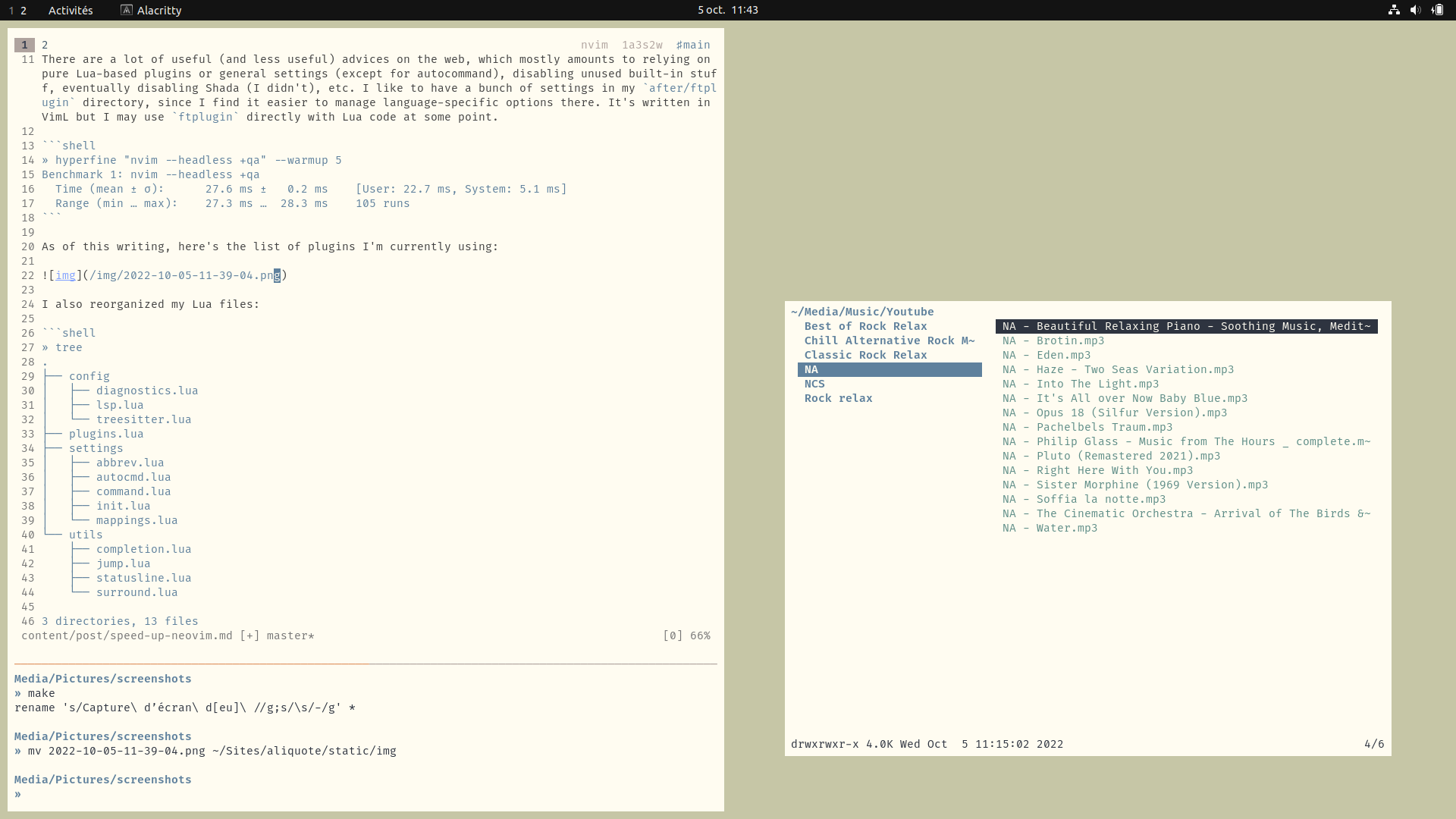 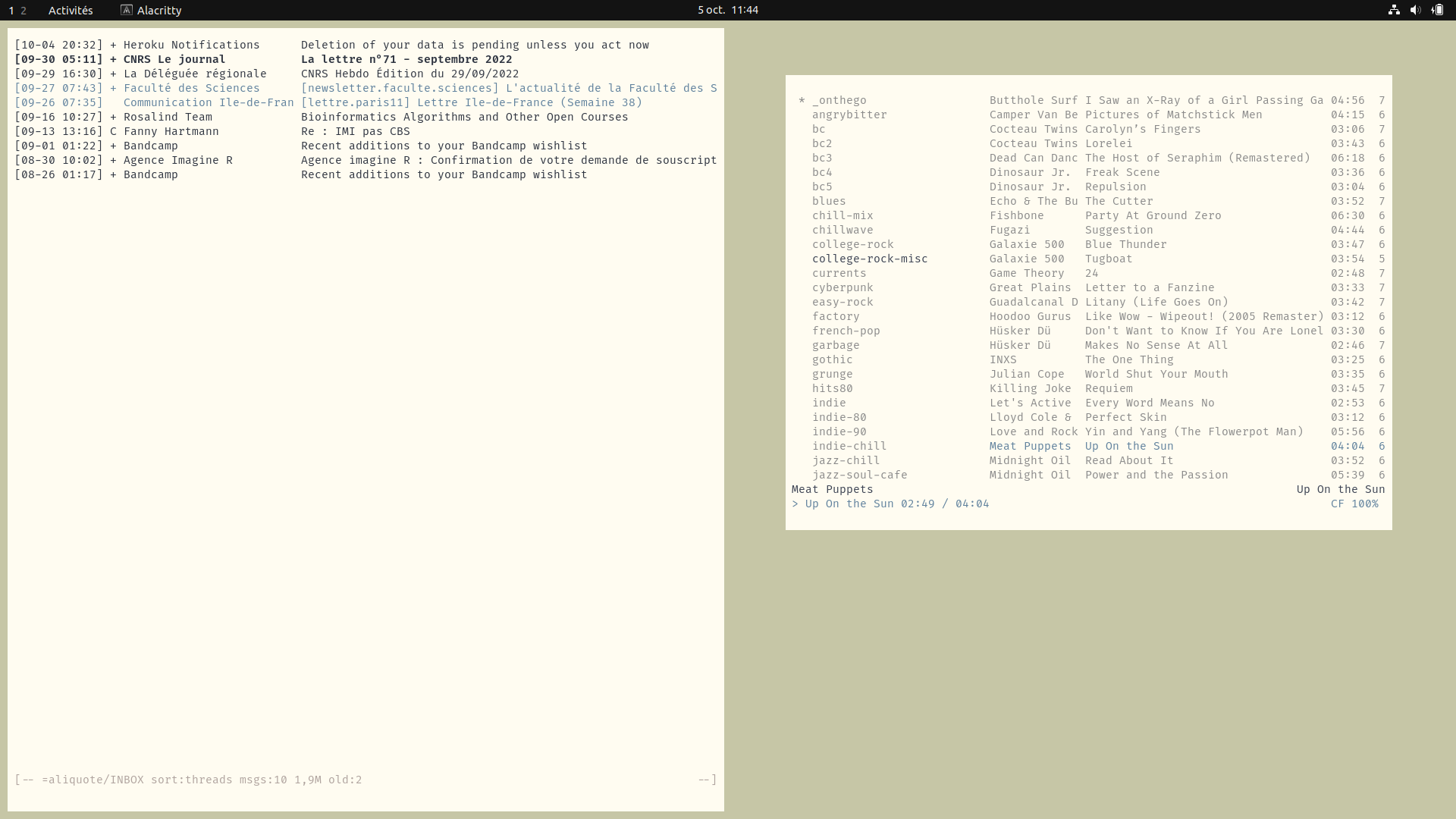