I’ve been a heavy Zsh users for years. I tried Fish some years ago, and although it was a great experience I came back to Zsh at some point, especially given that I could get autosuggestions as well in a POSIX-compliant shell. On deskto.ps I noticed a very nice setup and I wondered WTF is this.

I spent some time configuring my Zsh prompt the way I like it to be: responsive and informative, no fuzzy stuff. The one we can see in the above screenshot looks too verbose to me, but that’s just me. My prompt-related Zsh mess can be viewed online, and it looks like this: 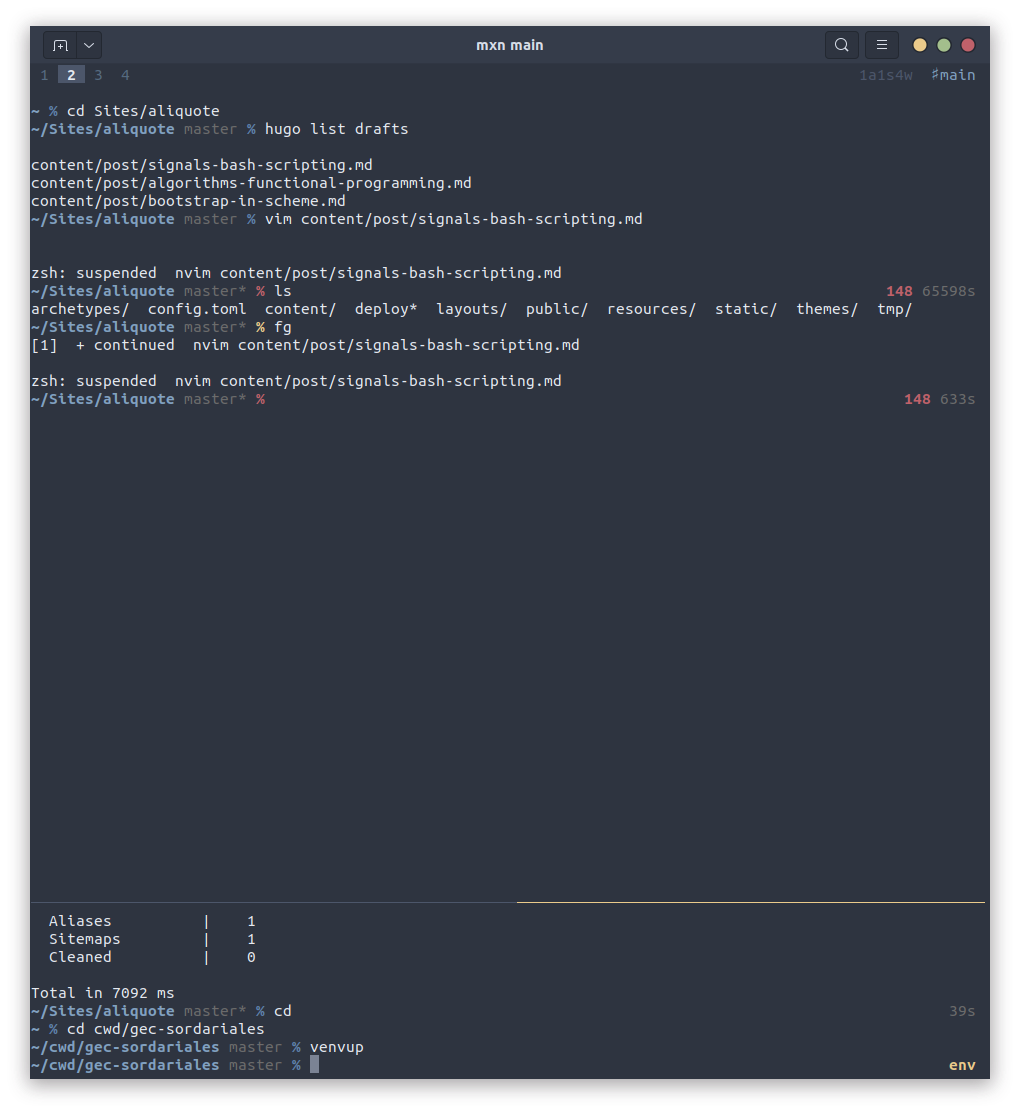 Specifically, I highlight Python virtual environment, command duration (when > 5s) and exit code, as well as Git branch with overall repo status. I don’t need to indicate whether files were added, modified or deleted, or any departure from a remote branch; I just want to know whethert he repo is clean or dirty. I use the same idea in my Neovim modeline.

Enters starship, which is supposed to be a

minimal, blazing-fast, and infinitely customizable prompt for any shell!

Being one of these blazing fast CLI utilities developed in Rust (think exa, fdfind, etc.), I thought I would give it a try. My idea was that since it only requires a single config file (in addition to the executable itself, which can be obtained using curl -sS https://starship.rs/install.sh | sh) I could reuse my setup on other machine quite easily.

I was able to reproduce my handmade Zsh prompt using the following settings shown below. The only difference is that I kept information regarding the virtual environment and Python version in the left prompt, and put evry transient information in the right prompt:

Cleaner, simpler to manage, no need to deal with Zsh precmd or use circomvoluted idioms to test whether we are in an SSH session or not. More to the point, once starship prompt is configured, it can be reused by any supported shell, including Fish.

The only thing that I wasn’t able to reproduce from my sh settings is that I used to use a subtle trick to show when there were multiple jobs running in the background: rather than displaying a symbol or the number of jobs in my left prompt, I just changed the color of the prompt character itself (from blue to orange when there’s at least one hidden job; likewise, I used a red color to indicate that the previous command exited with no zero return code). Bonus point: the right prompt doesn’t move when you resize your terminal, that is it remains right-aligned and does not stay in the middle of nowhere after you reduced then maximized your terminal window.