Sublime Text is one of the latest killer app on OS X, although it is also a powerful cross-platform text editor. But, that just ain’t to be a text editor, right?

I am a huge fan of GNU Emacs, so why writing about another text editor? For OS X users, there has been Textmate which has not kept its promises to update, so to speak. It is now on Github, but see also Textmate 2 and why you shouldn’t rewrite your code. There was also smultron, fraise, and now chocolate. Want more funny stuff for HTML dev? Check out Coda. All that to say that it is a matter of taste… and leverage. As always, simplicity matters, but you need to feel confident with your preferred text editor.

Sublime Text is great because it has a very simple user interface: no fancy buttons, a simplified and useful status bar, two magic commands (⌘-P and ⇧-⌘-P). Configuration is done via text files, with Python as a driving language. I tried it for a day or so, but obviously that is not enough to really gauge its capabilities. However, I soon found myself missing some nice tools from Emacs: first, keyboard shortcuts are really different–looks like I had to rewire my fingers, buffer management and file/directory browsing (I’m thinking of dired-x and ido-mode, among others). Of course, there’s sublemacspro which provides some of Emacs key mapping, but that’s just too limited. I have an Emacs.app but I mainly work from a terminal with bash, jobs, and the unix way of life; I just can’t do that with Sublime Text. I found little support for R or $\LaTeX$, as compared to Emacs. I’m missing inferior processes where I can just lauch any interactive program I want in a dedicated buffer, although I was able to run Clojure thanks to the sublimeREPL package, which uses lein repl.1 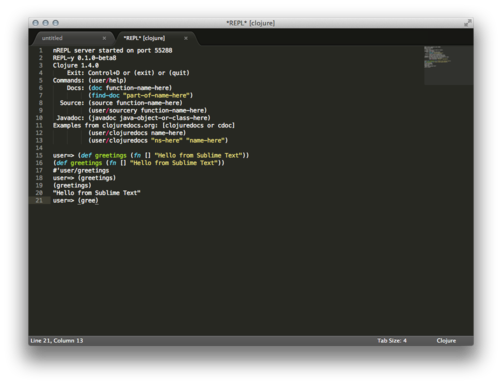 My conclusion is that I will stick to GNU Emacs: with age, I’m less inclined to change my work habits; but I will certainly recommend it for students and people interested in leveraging their text editing activities.

Finally, some links where authors provide a much better description of pros (and cons, occasionally) of Sublime Text: