As part of my investigation on Lisp-based solutions for statistical computing (see also this related post), I am now trying to get a working installation of Lush.

I discovered Lush some time ago (two years at least) but only think of trying it more seriously after having reread Ross Ihaka’s famous papers on the need of developing a new statistical programming language (after R). In Back to the Future: Lisp as a Base for a Statistical Computing System (PDF), and the accompanying slides (PDF), he argued that he obtained better performance in Lisp with real and artificial datasets, compared to R or Python.1 I don’t know what software they use, but I guess it is based on some derivative of Common Lisp (CL).

I spent some time figuring out how to get a fully working Lush system, including compiled C code. For the moment, it failed for the Function Compilation part, that is everything related to dhc-make. I was initially thinking this was a problem related to “architecture” management under OS X, but it appears this is more serious than this. According to this thread, Problems with Lush in OS X Snow Leopard:

Indeed, libraries typically have a .dylib extension rather than .so (OS X uses its proprietary Mach-O object file format and not ELF as in any un*x-based OS).

It is pretty silly as I initially wanted to benchmark pure vs. compiled Lisp code against other CL implementations, R, and Python. Anyway, here is how to get the Lisp-only version of Lush on OS X (32 or 64 bits).

We first need to full readline support (Apple ships libedit which lacks many of readline feature).

Creating a 32 or 64 bits only library is not very convenient and we can create a Mach-O universal binary (with 2 or 3 architectures) instead:

We can check that the generated library has the expected format:

To compile Lush, we need to set a lot of parameters during the configure step. Here is what I used:

Then make should work. You can test Lush directly from the installation directory:

To see if it support the X11 interface, let’s try to launch the help panel:

A window like the one shown below should pop up on the screen. 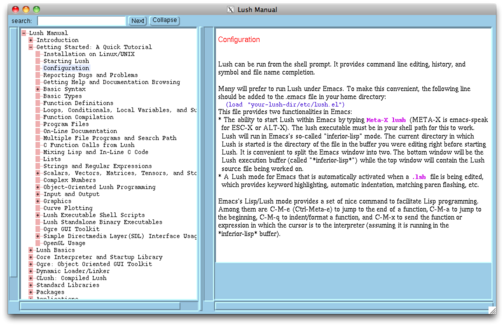 To build a 32-bits version, we need to adjust CFLAGS and CXXFLAGS (-arch i386) or directly pass the m32 flag to gcc. In my case, I generated both versions but then only installed the 64-bits executable in /usr/local with make install (with root privileges).

I’m afraid I won’t be able to test the OpenGL and GSL binding, and most of other things that were very exciting from the documentation. Likewise, the Machine Learning package doesn’t work. Trying something like the example below results in a GASP error (dyld: dyld std::terminate()):

Not all packages use dhc-make, though. For example, I successfully reproduced the on-line example with the built-in plotting facilities: 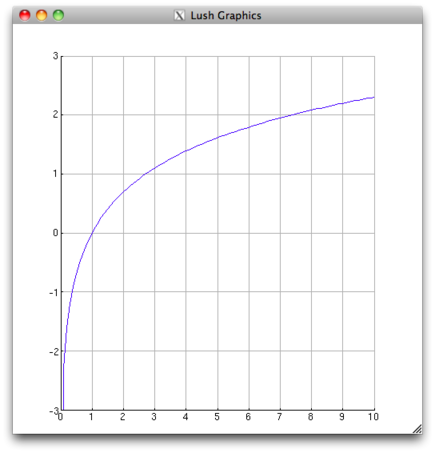 » Diving Into Lisp for Statistical Computing » Getting started with Slime