Some notes about installing and testing StatWeave with R and Stata.

StatWeave is yet another way to weave code chunks and text into a single document. The idea of interlacing code and doucmentation is borrowed from the famous web (PDF) and cweb systems developed by D Knuth who also coined the term “literate programming”. There is a draft article on Lightweight Literate Programming, which has evolved as an extended discussion of the following paper: Allan Stavely, Lynda Walsh, and John Shipman. “Lightweight Literate Programming: a Documentation Practice”. Technical Communication. Vol. 55. No. 1. 23-37. February 2008.

For R, we already have Sweave and its variants, but see the CRAN Task View on Reproducible Research. I used it a lot for preparing my courses (handouts and slides with beamer). But, in the meantime, I rediscovered noweb which is closer to the web software, and more general in some sense. I know Luke Tiernay is using it for documenting his R projects, and I once found a very pretty document by Jason Catena using the Tufte LaTeX class together with noweb, Study Haskell.

I grabbed the Statweave jar file a long ago, but never tried it for real. Now, following a question on tex.stackexchange.com I reinstalled it and try to process some R and Stata document. Well, I don’t think I’d pushed it to the limits, but at first sight it is quite straightforward to get a running PDF in few commands. What I like is that it works with Stata on my Mac.1

Here is a sample R document: 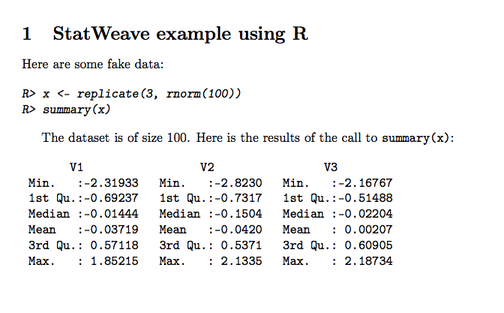 And here is one with Stata commands embedded:

The idea is as simple as that of Sweave: you include code chunks in a dedicated environment (here, it starts with \begin{XXcode} and stops with \end{XXcode}, where XX stands for the foreign language). The Stata example simply reads:

Nothing really difficult in terms of syntax. The configuration of Statweave is also easy. I just changed the default setting for Stata, before noticing that everything was already in the on-line help (RTFM!). So, only the first item in the configuration dialog has to be update in order to reflect the location of your Stata executable:

It seems to be possible to use Matlab and Maple. I will try to configure StatWeave to accept Octave code, instead of Matlab that I don’t use anymore since the end of my PhD.